Area Manager John Fry measures the value of redesigning the processes around polarity testing and development of the Polarity App in very simple terms – it helps crews get a fundamental process right.“People can die if we get it wrong,” John explained.

“The App is available to everyone in the field and it provides them not only with a tool to help them get the process right for polarity testing, it also provides our people with evidence they’ve followed the right procedure.”

The business is now doing more than 60,000 tests each year since the first trial of the Polarity App in September 2019 and significant incident frequency rate has decreased because of the new processes guided by the App.

“The first step was to revise the test process to align to how work is actually completed, increasing the knowledge of staff performing the testing and ensuring the polarity testing is carried out correctly by stepping them through the required steps,” John said.

“The old processes weren’t easy to follow and people who thought they knew the process was missing steps, so we really needed a tool that could tidy that up and give people a sequence to follow based on the activity they were doing. 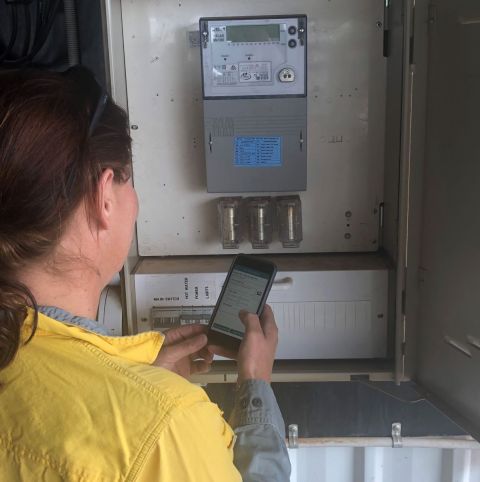 ”From start to finish the development, testing and implementation of the Polarity App, took about four months with the assistance of John Crighton, Ash Coote, and was the concept of field person Mick Bellero Hundreds of field staff across the state also helped design, test and improve the app.

“Initially everyone thought we needed to make the process shorter and simpler because we were bringing it together for both Ergon Energy and Energex crews, but the reality was that as we started pulling it (the process) apart we realised we had to add a few steps to control the hazards that were catching us out,” John said.

“Even after we launched the first version of the app for trial in the field, I knew we’d have to tinker with it … and we did.”

“That was why we put it out into the field – to defer to expertise so we could gather information and experiences from a really broad range of crews because they were the ones who needed to use it.”

“While that first version was in the field, Ash (Coote) was already re-designing an update to deploy.”

“I reckon about 300 people touched the App at some time during its development, in the learning groups and testing groups and in field trials.”

The current version of the app was launched in December 2019 and it is now a requirement that every member of every crew across the Ergon and Energex networks have the Polarity App on their phones and use it when performing testing.